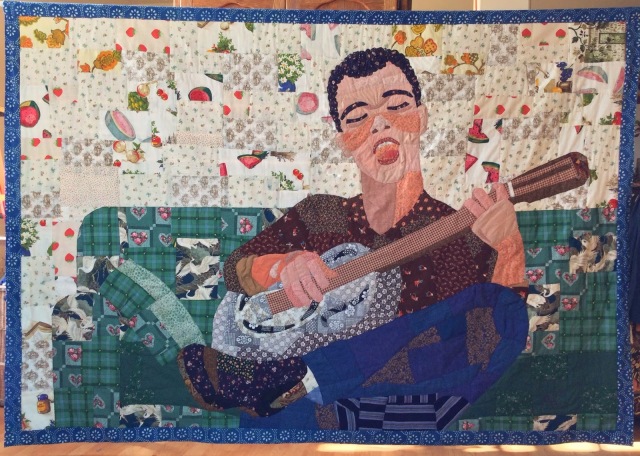 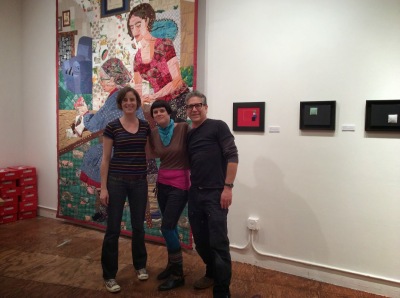 Amber and I hung the show today! And we’re so excited!

Well, mostly Amber and the incomparable Vincent Avalos did: how lucky are we to have the head guy of installations at the Asian Art Museum volunteer his time to help us display everything just so?!?

So we’ll be there for First Friday from about 5 – 9, in addition to our own dedicated reception on Jan 10th, next Friday. That night, from 7pm onward
we’ll have snacky-foods, wine, and
artist’s talks, as well as more time to
spend with you all.

But if you can’t
make next Friday, come see us tomorrow night!

I’ll have oodles of new bags for you too, if you’re needing one.

Come and see embroideries by Amber Avalos and quilts by Amy Cools! The works will be shown throughout the month of January, will debut at First Friday’s Art Murmur, and our own reception will be held on Friday, January 10th, 7pm

Sweaters in July, you ask? But of course! Here in the U.S., we’re feeling those hot summer days, but nights are another matter! If you’re like me and live in a seaside town, early evenings turn chilly fast as that fog rolls in, and it stays gray and chilly ’til late morning the next day. And of course, I get to share my great vintage finds with the world here in my online shops!

So today I’ll be listing some great little sweaters at afterglow vintage!

So I promised you about a week and a half ago that I would get back to you on that batch of fresh dill pickles, to tell you how they turned out.

Well, right about the time they were ready four days later, I came down with a nasty chest cold, and ever since then, my sense of taste has been nearly entirely gone. They turned out pretty tasty, my husband said, save for one thing: I hadn’t thoroughly dissolved the salt in the water, it turns out, so the top pickles were not very salty, and the bottom ones were too salty. I took the too-salty ones and put them in a jar with plain water, and the next day, they were just right. So, lesson learned: that salt don’t mix itself.

Anyway, as I also mentioned last time, the leftover brine from a jar of pickles can be used again, and this time, I took that brine (after mixing it well!) and filled it with lightly cooked beets, sliced onions, and black peppercorns. I refrigerated them for four days.

So here they are, and they turned out pretty tasty, so far as my stuffy self can tell, and my husband likes them. They’re just the right saltiness and tenderness, and what a pretty color too!

He does suggest that I don’t use dill for the next batch of beet pickles, because he thinks that the dill taste predominates too much over the beet taste. I’ll have to take his word for it for now!

This is my new favorite fabric in my vintage fabric shop right now!

I can’t tell its exact vintage, but I think it’s quite old, I would guess from the 1930’s or earlier. It looks like many antique cottons I’ve found too, pre-dating the turn of the centuryBy feel, look, and burn test, it appears to be all cotton, heavier than calico and a little lighter than most twills, though it has a crosswise twill-like weave

My new favorite fabric in my collection right now!

44″ tall / wide
2 yards 11″ longFantastic 1960’s dancer and drummer border print fabric in green, brown, yellow, orange, and black on whiteThe selvage reads: ‘Vogar Fabrics Div. of Carolina Cottons Inc. c. 1963There are a few areas on the fabric with light discolorations from age, that washing did not removed, but are so pale they didn’t show up in pics. I don’t think it really detracts from this wonderful bold print