I started with a brine, less salty than usual because I added lots of fish sauce, which is very, very salty. I also used oodles of pepper flakes, garlic cloves (cut in quarters), fresh ginger slices, a little simple syrup (dissolved sugar), and green onions. I didn’t measure, only eyeballed and tasted the brine as I adjusted it. I did count the squirts of fish sauce I put in: 25 each jar. Each squirt is the amount that come out with one shake of the bottle. This might be too much for some, but I love fish sauce.

The jars are filled only half full, of course, so there’s plenty of room for the cabbage.

I didn’t really follow a recipe, although I read several to get a sense of what’s usually done to make kimchi. I also depended on my memory of how other kimchis tasted and the ingredients I could see as well as the flavors I detected, especially in the style that’s sold very fresh and lightly fermented in a brine.

Before I prepared and spiced the brine, I cut up a head of nappa cabbage and thoroughly rinsed it, and let it soak in salty water for an hour, as several recipes suggested. (I’m not sure this step is necessary for this style of kimchi. I did it anyway since it also seemed a good way to make sure the cabbage was nice and clean.)

When the brine was all ready, I packed that cabbage in tightly, and it turned out I had exactly enough room for one head of cabbage in these two large jars. 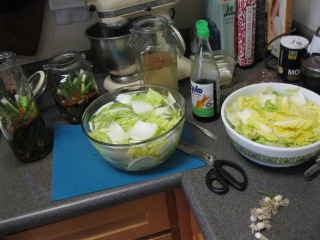 Kimchi bubbles up quite a bit as it ferments, so I placed the jars in a casserole dish to catch the overflow. Also, make sure all the vegetables are pushed down below the water line, so they don’t mold. I found that those little glass Fire King custard cups are perfect weights for this purpose if the veggies won’t stay down on their own. The lids stay open as it ferments for three or four days at room temperature. I covered the jars with a kitchen towel to keep the dust out. 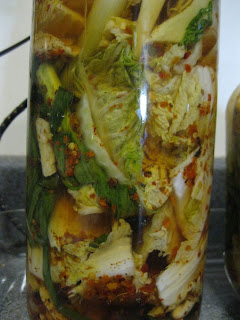 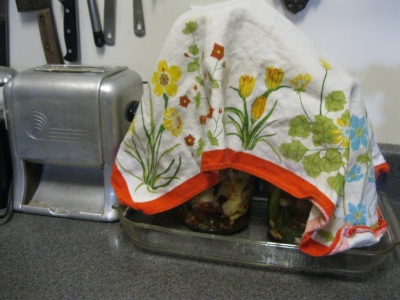 The kimchi is delicious, fresh-tasting and spicy! The fish sauce has a funky smell which some find pretty nasty, but it bothers me no more than the stinky-foot smell of tasty cheese. The only changes I would make: more ginger, and a little more sugar to round out the flavor more, the amount I used was too little for so much brine.